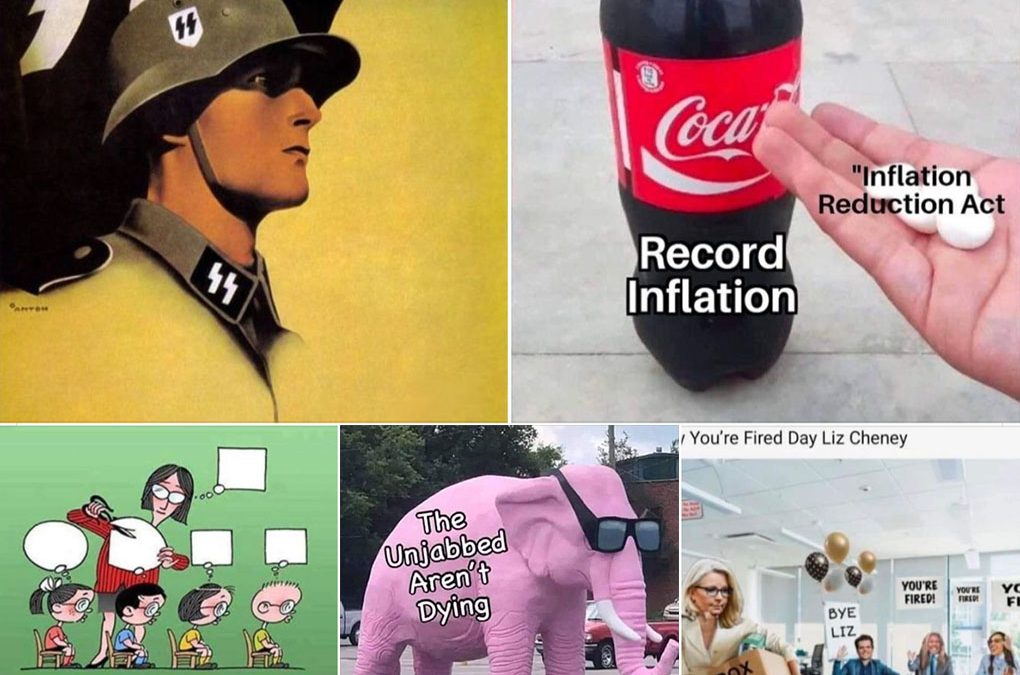 Get an update and sneak peek of the 5th Edition content and my take and investigation into HBO’s The Anarchists.

Enjoy these pokes at the powers that shouldn’t be.

It was just brought to our attention that Lijian Zhao, the spokesperson for the Chinese Foreign Ministry, has tweeted a carefully crafted meme concluding that 9/11 was an “Inside Job”. This tweet makes an unusual and incredible bold statement about China’s position on 9/11 – implying that American was behind the 9/11 attacks:

This week I’d like to start out with explaining the most power weapon in the world: Control-of-Perception – I.E. the ability to control the information that the population receives to control their “reality” and culture. The sub-title of: “Government” – The Biggest Scam in History… Exposed! is: How Inter-Generational Organized Crime Runs the “Government”, Media and Academia.

Can the monopoly media system make you believe that “terrorists” blew up the World Trade Center? That North Vietnam attacked US Destroyers in the Gulf of Tonkin? That Iraqi soldiers tossed babies from Incubators in Kuwait? That the drug cartel killed John Galton and the Anarchy movement is led and represented by Jeff Berwick, Luke Rudkowski, and Lily Forester?

Click here to continue reading the rest of the free version on SubStack including my 10 Solid Reasons Why I Think John Galton and Paul Propert May Still Be Alive!

Please subscribe for $5 a month to support the Art of Liberty Foundation’s investigative series into the Scam of HBO’s “The Anarchists” and Anarchapulco or consider becoming a $250 founding member which gets you a signed hardcopy of our upcoming 5th edition of “Government” and “The Covid” – The Biggest Scams in History… Exposed!

What is behind the paywall this week? What About Paul Propert? CIA Easter Eggs.. Again.. Masonic Symbolism… Introducing Thaddeus “Bad Thad” Russell and Lily drops the “Hidden Curriculum” of the series!

Update on 5th Edition of “Government” – The Biggest Scam in History… Exposed! Investigation into “The Covid”

Update on the 5th Edition of “Government”
Latest Estimate: Book Should Ship to Printer by Sept 11th.

64GB Liberator Coming – We are expanding: The Liberator to 64GBs.  Everyone who ordered the 32GB Liberator will get many additional GBs of material for free!

Funding: Since we only raised $20,000 ($15,250 from IndieGoGo and ~$4,750 in Epic Cash) of our $35,000 goal we are looking for a heavy hitter or two to help us get the book out in a BIG way.  If you or anyone you know might be interested then please e-mail me at Etienne@ArtOfLiberty.org where I can take you through the new edition and plans.

Free Download of the 4th Edition for IndieGoGo and Five Meme Friday subscribers – We are making the 4th edition of the book available for free download to our IndieGoGo backers, Five Meme Friday subscribers, and anyone who downloads the full Liberator.  You can find the 4th edition with all the hypertext links in the Liberator#1 Dropbox here: https://www.dropbox.com/sh/cocj4c4g4dge5ae/AAD989ik8cHQaoINjIrw9q3da?dl=0

The Liberator – Our archive of “government” and media criminality

Important Note: New additions are added to the authoritative Liberator Dropboxes regularly but will not appear in the physical credit card-sized flash drive until we launch the next version.  Anyone can download the current contents of the Liberator FOR FREE including all the primary sources and evidence from our investigation into “The Covid”.

Liberator #3 – Evidence that “The Covid” has been a scam and the vaccines are killing people: https://www.dropbox.com/sh/flf3694718or4tb/AADBa0rLhBC2hlbAH7uo3DE4a?dl=0

Interview of the Week

Organized Crime Researcher Etienne de la Boetie² is the author of “Government” – The Biggest Scam in History… Exposed! Where he makes the case that “Government” is illegitimate, was never intended to protect life, liberty and property but has always been used by inter-generational organized crime to rob and enslave. He is a voluntaryist, author, father, technology entrepreneur, ex-Wall Streeter, cyclist, runner, hot yogi, multi-disciplinarian truther, armchair economist, cryptocurrency enthusiast, and neo-abolitionist.

Liz Cheney Lost the Primary. How Did She Make $36 Million in 6 Years While in Congress?

US Representative Liz Cheney lost the Wyoming primary to her Trump-endorsed rival by 30 points when she delivered her concession speech. She chaired the House Republican Conference, the third-highest position in the House GOP leadership, from 2019 to 2021 — but lost support in her own party when she became critical of Donald Trump. Cheney was the vice chair of the biased House select committee investigating the Capitol riots. Tucker Carlson reported that when Liz Cheney took office in 2017, “her net worth was estimated at $7 million dollars, which is a lot for someone with no skills, but that’s what she had.

Etienne Note: THIS IS ONE OF THE BEST COVID DOCUMENTARIES I HAVE SEEN

Watch the official public release of Matador Films new “Uninformed Consent” documentary, presented by Librti.com and Vaccine Choice Canada. An in-depth look into the Covid 19 narrative, who’s controlling it, and how it’s being used to inject an untested, new technology into almost every person on the planet.

News Of The Week

Back Off, Oh Masters of the Universe – Jordan Peterson

Over half a million views on Youtube in 24hrs is good news (Orwellian censorship/wrong-think notice and all). View it here without supporting google. https://odysee.com/@JordanBPeterson:c/article-back-off,-oh-masters-of-the:1 (26 minute video)

The UK Government has revealed that 1 in every 482 people vaccinated against Covid-19 in England sadly died within a month of receiving a dose of a Covid-19 injection.

For months on end, Government institutions have claimed they do not hold any data on deaths by vaccination status. But they have been lying to you.

On the 6th July, a UK Government institution known as the Office for National Statistics, published a dataset on deaths by vaccination status in England between 1st January 2021 and 31st May 2022, which can be found here, and it makes for horrific reading.

IRS Report Shows Heavily Armed Agents Simulate Assault On Suburban Home
In the Internal Revenue Service 2021 annual report, IRS Criminal Investigation special agents can be observed simulating an armed assault on a suburban home at the agency’s National Criminal Investigation Training Academy (NCITA), located within the Federal Law Enforcement Training Center (FLETC) in Brunswick, Georgia. The organized crime “government” claims they are going after billionaires but the truth-of-the-matter is that 75% of IRS audits targeted Americans making under $200,000 per year.

Truth Music of the Week

Europe:London Anarchy Meetup, Libertarian Meetups – Göteborg, Sweden
Asia: VOLUNTARYISM! Living Peacefully and Morally!( Pattaya, Thailand)
Everywhere: Freedom Cell Network, Caledonia,
Have a Liberty event, group or meet-up that you would like featured in our calendar? Drop us an e-mail to: Events@ArtOfLiberty.org

There is an insurrection afoot in the State of New Hampshire. The State Constitution is being subverted, and by an enemy within. As Thomas Jefferson warned, the price of liberty is eternal vigilance – but vigilance is not enough. We must act to protect our great state.

A real-life Karen has filed a petition with the NH Ballot Law Commission requesting a hearing to deny ballot access to 14 members of the state legislature running for re-election this year. Here is the complaint filed:

“It is my assertion that the following people are no longer eligible to hold office in NH and thus are unqualified to run for office as they are in violation of the 14th Amendment to the United States Constitution, Section 3.

2) The 13 members of the NH House of Representatives voted to not ITL (Inexpedient to Legislate) or kill the bill/NH Constitutional Amendment.”

This complaint was filed by a real life ‘Karen’ named Karen Steele. It is a blatant attack on the Constitution of the State of New Hampshire and on multiple natural rights.

The Everything Bundle – The Sampler of Liberty!
Give me Liberty… and give me more! The Everything Bundle includes the latest version of our flagship book on government, along with a collection of potentially life-altering introductions to anarchy, agorism and voluntaryism.

Are you Ready for Autonomy? Learn what the powers that shouldn’t be tried to hide from you. Reclaim your power, and change your life.