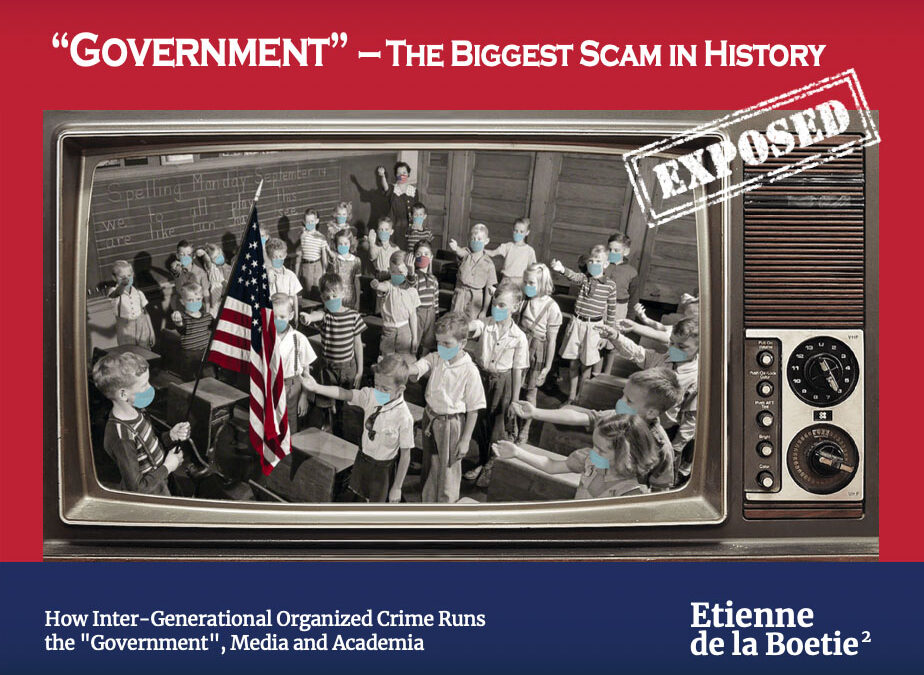 The book that exposes how inter-generational organized crime runs the “government,” media and academia releases an updated Fifth Edition and launches with the hit song: SCAM by Prezence

January  11th, 2023– The Art of Liberty Foundation, a start-up public policy organization exposing inter-generational organized crime’s control of the “government,” media and academia from a principled voluntaryist perspective, has released the 5th edition of “Government” – The Biggest Scam in History…Exposed! – How Inter-generational organized crime runs the “government,” the media, and academia.

The book reveals that “Government” is illegitimate, illogical, unnecessary and a technique (scam) of inter-generational organized crime to rob and control societies. The book is scientifically designed to bring visual learners to the “moment-of-insight” by using visualizations, historical photos, memes, and infographics to expose the historical patterns and make previously invisible connections between politicians, media, intelligence agency operatives, and front organizations like the CFR and World Economic Forum visible through visualization.

The book’s good news voluntaryist message is that we don’t need “government.”  The world is a self-organizing system that produces spontaneous order, and everything the “government” does, except redistribution, which is immoral, could be done better, faster, and cheaper by the free market, mutual aid societies, non-profits, and genuine charities.

The book debuted in 2019 and has now become a global hit with almost 6000+ copies sold to 20+ countries, while a free PDF preview of the 4th edition has been read online or downloaded over 20,000 times. The book has become one of the rare titles people buy in bulk for friends, family, and colleagues, donate to libraries and little neighborhood mini-libraries, and put out as coffee table books at AirBnBs with over 25% of sales as five and 10-pack “Friends Bundles.”

The book is backed up by a credit card-sized flash drive called: The Liberator, which has also been updated and expanded to 64GB of evidence backing up the book, including censored documentaries, important books in PDF, short videos, dank memes, and truth music from the liberty movement’s hottest artists.

The Pop-Up Guerrilla Bookstore – Thanks to the generosity of donors to the Art of Liberty Foundation, we have developed a retail kit to get around the censorship of cartel-owned chain stores and chain bookstores, where anyone with a retail location can attractively merchandise the book in a small footprint and share in the profits.  The initial investment is $275 for 10 books and 10 Liberator flash drives& includes a one-time $50 retail kit, which yields a net profit of $155-$305 depending on the ratio of $45 discounted book/liberator bundles sold. The bookstore is refilled in 5s & 10s for an even higher net profit margin once the retail kit is paid for. Government-Scam.com/Bookstore

Collaboration with Grant Ellman of Prezence – the 5th edition IndieGoGo campaign was launched by the release of “Scam,” a new single by conscious reggae artist Prezence inspired by the book.  The song written, performed, mixed and produced by Prezence singer/songwriter Grant Ellman is a full-on lyrical body blow to the scam of “The Covid.” The song and video are included in the new 64GB Liberator flash drive. You can find the video for Scam and the lyrics at www.ArtOfLiberty.org/Scam

The fifth edition is now in-stock and shipping with same-day fulfillment at Government-Scam.com/store for $30, while the new 64GB Liberator is $30, or both are available in a combo offer for $45.  There is a high-resolution hardcover for $50 and an ePub for $10.

Etienne de la Boetie² is the nom de plume of a voluntaryist author, father, technology entrepreneur, cyclist, runner, hot yogi, multi-disciplinarian truther, armchair economist, cryptocurrency enthusiast, and neo-abolitionist who is experimenting with large-scale cult deprogramming. Mr. Boetie² distills 20+ years of research into short, easily digestible treatises on individual subjects and optimizes them for the 65% of society who are visual learners. Boetie² includes references and links to more comprehensive research and the “authentic voices” of the developing alternative media.

Mr. Boetie² is the author of “Government” – The Biggest Scam in History… Exposed! which makes the case that “Government” has been a scam of inter-generational organized crime to rob and control populations. Mr. Boetie² is the founder of a start-up public policy organization: The Art of Liberty Foundation, that is developing voluntary and free market solutions to social issues while exposing the illegitimacy and criminality of “government” and the hidden curriculum of organized crime’s mandatory government schools, scouting programs, and police/military “training”: The pseudo-religion of Statism, obedience, fealty, “order-following” and tax slavery. You can find all of his important links at LinkTr.ee/ArtOfLiberty

A start-up public policy organization: Voluntaryist crime fighters exposing inter-generational organized crime’s control of the “government,” media and academia. The foundation is the publisher of “Government” – The Biggest Scam in History… Exposed! and Five Meme Friday – a weekly e-mail or Telegram summary of the best of the alternative media, censored truth videos, and at least 5 hot, fresh, dank liberty memes every week, and “Government,” Media, and Academia Exposed! – A Telegram summary of the best mainstream and alternative news story proving our thesis that all three are being hierarchically controlled by inter-generational organized crime interests.