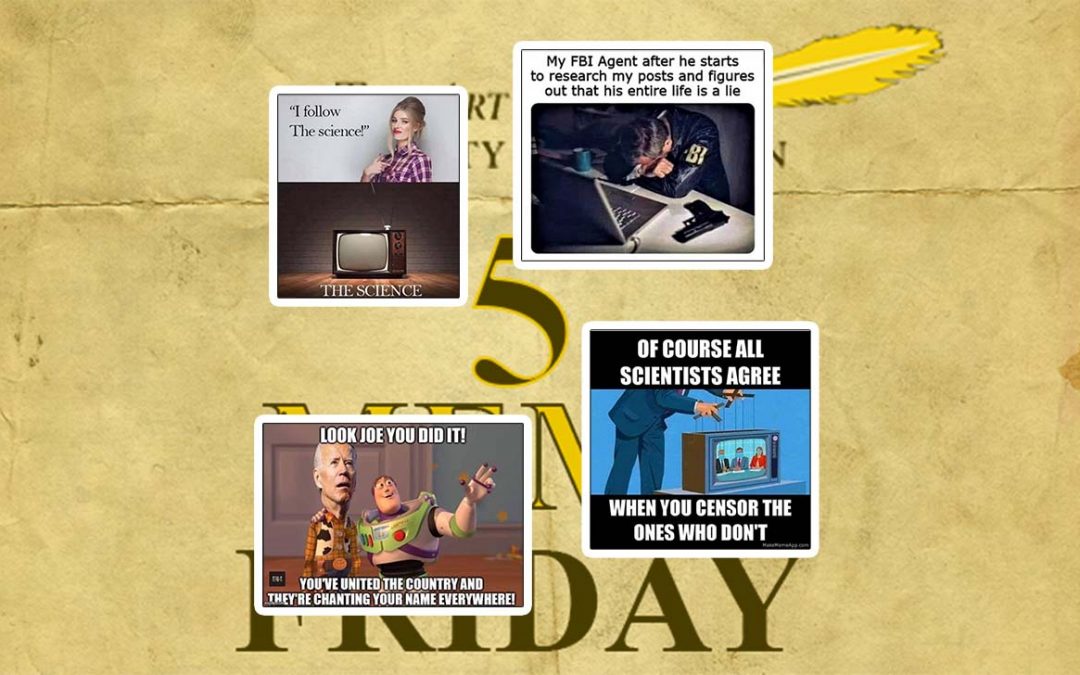 Enjoy these pokes at the powers that be.
The Art of Liberty Foundation and Etienne de la Boetie2 bring you 5 fresh and dank memes every Friday, delivered right to your inbox.

Want more? Subscribe to our Art Of Liberty Newsletter!

Enjoy these pokes at the powers that be.
The Art of Liberty Foundation and Etienne de la Boetie2 bring you 5 fresh and dank memes every Friday, delivered right to your inbox.

Want more? Subscribe to our Art Of Liberty Newsletter!

5th Edition of “Government” – The Biggest Scam in History… Exposed! is coming soon!

As you likely know, this is a book that has been scientifically designed to wake up friends, family, and coworkers to the reality that “Government”, of every flavor, has been a scam of inter-generational organized crime since the beginning.

Because you are on my email list, I wanted you to be among the first to know about my upcoming fundraising campaign. The proceeds will help us with printing and publication, launch and promotion, and hiring a part-time Researcher/Endnote Migrationist.

Why is this relevant for you? Because there are some pretty amazing perks in it for you if you donate…

To get a sneak peek, I invite you to check out this preview.

Videos of the week

A recurring segment in Five Meme Friday where we chronicle the news that makes the case that the “Government” is being being run by inter-generational organized crime who are stealing trillions.  Join our Telegram Channel devoted to evidence of “Government” criminality here: https://t.me/Government_Scams

To send articles and evidence for consideration and to report “Government” and media criminality in your town or city, please send to: Evidence@ArtOfLiberty.org

News of the Week

EXCLUSIVE – 100% of Covid-19 Vaccine Deaths were caused by just 5% of the batches produced according to official Government data – “An investigation of data found in the USA’s Vaccine Adverse Event Reporting System (VAERS) has revealed that extremely high numbers of adverse reactions and deaths have been reported against specific lot numbers of the Covid-19 vaccines several times, meaning deadly batches of the experimental injections have now been identified… But what’s perhaps more concerning is that the “deadly” lots were distributed widely across the United States whilst other “benign” lots were sent to just a few locations… The data used in the investigation was pulled from the publicly accessible VAERS database which can be viewed here. The Vaccine Adverse Event Reporting System (VAERS) is a United States programme for vaccine safety, co-managed by the U.S. Centers for Disease Control and Prevention (CDC) and the Food and Drug Administration (FDA).”

In Sweden, a new study followed 840,000 people who were double vaccinated for nine months which is longer than any previous study. The researchers matched them or “paired them” with another 840,000 people who were the same, age, sex and from the same area. Out of this 1.6 million pooled sample, 27,000 people went on to get infected, and most of them were unvaccinated (21,000). So that’s not surprising, but underlying this data was an extraordinary trend showing efficacy falling month after month. In the first two to four weeks, the double vaccinated were very well protected. But by nine months later, the efficacy was not just zero, but negative.

Elliot sets the boundaries for reasoned rhetoric before taking a look at what’s not right about the current vaccine narratives, including the vaccine’s pressure to mutate; testimony by respected doctors and scientists… including one Nobel prize winner; clearly established risks; and statistics from the VAERS database.

Iain Davis of In This Together joins Whitney Webb for an important conversation on the network of institutions, corporations, and governments that are at the center of global decision-making. This global public-private partnership already exerts considerable control over our lives and our society and is quickly moving to control even more.

Conversation w/Forensic Historian & Host of Grand Theft World, Richard Grove – Monica Perez welcomes Richard Grove to the Propaganda Report for a freewheeling discussion on digging into history that’s been hidden in plain view, including the Rothschilds, the Macy Conference and psychological control, and the erasure of historical truths about England. Other topics include the war against critical thinking, America’s educational system, book collections and Richard Grove’s course, Autonomy.

The Everything Bundle – The Sampler of Liberty!
Give me Liberty… and give me more! The Everything Bundle includes the latest version of our flagship book on government, along with a collection of potentially life-altering introductions to anarchy, agorism and voluntaryism.