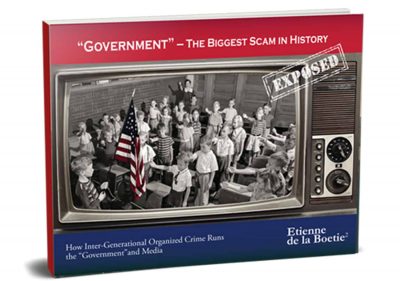 “Government” – The Biggest Scam in History Exposed! exposes the hidden control system and pseudo-religion of Statism used by an inter-generational organized crime system centered around banking and central banking to rob and control the population. Using historical photographs, media ownership charts, infographics and memes the book is designed to accelerate and deepen the understanding of the 65% of the population who are visual learners including revealing historical patterns, organizational structures, banking monopolizations, and other previously hidden connections through visualization. The book catalogs 20+ unethically manipulative techniques many traditionally associated with cult-creation to indoctrinate free human beings into a worldview that produces obedient “tax-payers” and classic shave-headed “Order Followers” willing to kill foreigners or enforce taxation and “government” edicts on their friends and neighbors.  The book provides positive solutions for freeing yourself and your loved ones from the mental and physical slavery of “Gubernare Mente”.

Save $5 when you purchase the companion media: The Liberator – An 8GB Flash drive with both evidence of “Government” illegitimacy/criminality and the best of voluntaryist and libertarian political thought/solutions in documentaries, short videos, books in PDF, truth music, and dank liberty memes.

There are no reviews yet.

Only logged in customers who have purchased this product may leave a review.