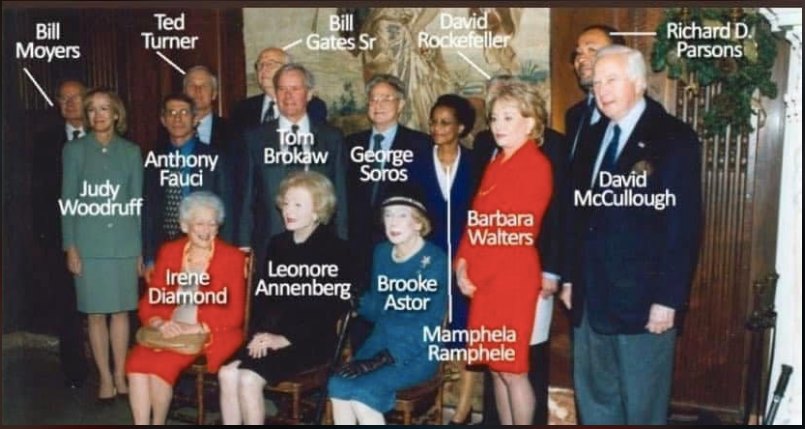 Anthony Fauci, director of the National Institute of Allergy and Infectious Diseases and lead members of the White House Coronavirus Task Force and Bill Gates Sr. pictured with the leading eugenicists on the planet and their media puppets. Eugenics (Best Short Summary and History: https://historynewsnetwork.org/article/1796)  is the belief that one can create a master race of people by selective breeding to develop positive traits like intelligence (positive eugenics) while negative eugenics focuses on eliminating undesirable traits through marriage restriction, segregation, sexual sterilization, and, in its most extreme form, euthanasia or even murdering those that eugenicists consider undesirable. In an attempt to decrease procreation among the “unfit,” laws prohibited marriage to people with diseases, or other conditions believed to be hereditary. Similar restrictions banned marriage between people of different races, in order to prevent miscegenation.  Through funding by many of the families in this picture, over 60,000 Americans were forcefully sterilized until the eugenics practices of Nazi Germany, largely funded by the Rockefeller Foundation, became known and the eugenics movement was forced underground. This image is from the Andrew Carnegie Medals of Philanthropy Awards ceremony on Dec 10th 2001 showing the CDC’s Anthony Fauci with the top eugenicists in the country.  Andrew Carnegie’s Carnegie Foundation founded the Cold Spring Harbor which housed the Eugenics Record Office until the late 1930s.  Some of the those pictured with Fauci include Bill Gates Senior, BoD Planned Parenthood, David Rockefeller, funder of Planned Parenthood and Cold Springs Harbor, and Ted Turner who famously said in 1996: “A total population of 250-300 million people, a 95% decline from present levels, would be ideal,” Ted Turner is also widely believed to be behind the Georgia Guidestones, a Stonehenge-like monument with eugenicist principals translated in eight languages.  Turner is also an organized crime propagandist behind CNN and the deceptions and distractions of cable television.  George Soros funds Monsanto and has been linked to the Kenema Government Hospital in Sierra Leone, US biosecurity level 2 bioweapons research lab with links to the Bill and Melinda Gates Foundation where research on Ebola was taking place.

(born June 5, 1926) is an American businessman, investment banker, fiscal conservative, author, and politician whose most prominent political position was as United States Secretary of Commerce from February 29, 1972, to February 1, 1973 under Richard Nixon. He was the Chairman and CEO of Bell & Howell from 1963 to 1971, and Chairman and CEO of Lehman Brothers from 1973 to 1984. He was Chairman of the Council on Foreign Relations until retiring on June 30, 2007, after being named chairman emeritus. He co-founded the private equity firm, the Blackstone Group. In 2008, he was ranked 149th on the “Forbes 400 Richest Americans” with a net worth of $2.8 Billion. In 2008, he established The Peter G. Peterson Foundation with a $1 billion endowment.

(born February 14, 1947) is an American businessman and investor and the chairman and co-founder of the Blackstone Group, the private-equity and financial advisory firm.

Schwarzman attended the Abington School District in suburban Philadelphia and graduated from Abington Senior High School in 1965[2]. He attended Yale University during the same period as George W. Bush, one year behind him (both were in the Skull and Bones society[3][4]) and graduated in 1969. He then went on to Harvard Business School and graduated in 1972.”[12]

Tim Evans / Senior Director of Health, Nutrition and Population at the World Bank Group and former Director at the Rockefeller Foundation